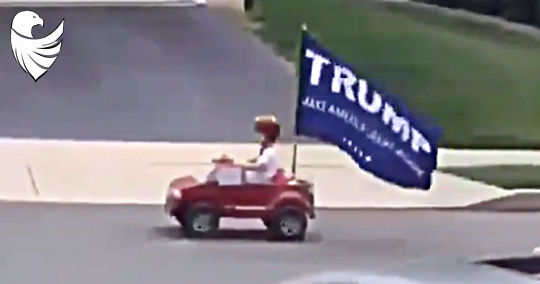 With the 2020 election drawing ever closer, Trump supporters of all ages are gearing up to show their support for the president, including one young “driver” who proudly displayed his “Trump” flag for everyone to see in a video that has since gone viral.

On Friday, President Trump’s son Eric shared the video, which showed the young Trump supporter and his vehicle, jokingly suggesting the boy’s Democrat neighbors likely called the police for “illegally operating a vehicle.”

How long did it take before a Dem neighbor called the policed on him for illegally operating a vehicle? (🔈up) 🤣🇺🇸 pic.twitter.com/GsAOLNi4G0