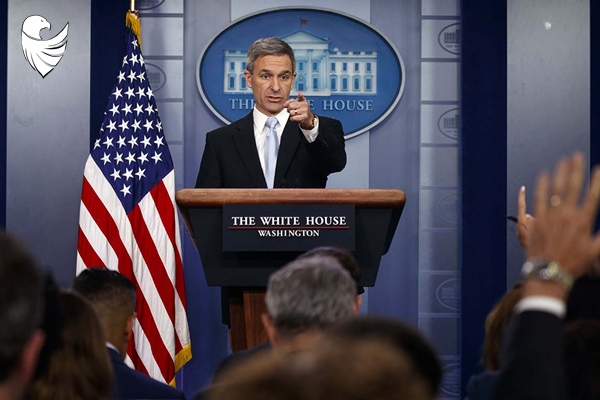 President Donald Trump is looking for a new political fighter to push through hard-line immigration policies — just in time for his reelection campaign.

People inside and outside the White House are lobbying Trump to give the job of Homeland Security secretary to Ken Cuccinelli, a newcomer to the administration who has quickly developed direct access to the president, according to five people familiar with the situation.

Cuccinelli, acting head of the relatively obscure U.S. Citizenship and Immigration Services, is one of the president’s top lieutenants for his aggressive immigration agenda who has the support of leading DHS officials, as well as Stephen Miller, Trump’s senior adviser who plays an outsize role on the issue.

But acting White House chief of staff Mick Mulvaney has reservations about Cuccinelli, a former state senator and attorney general in Virginia whose past comments on social issues, including rhetoric criticized as anti-LGBT, gives Mulvaney “heartburn,” according to a top DHS official. The White House did not respond to a request for comment.

Trump will name his fifth Homeland Security secretary as soon as this week following years of frustration with his immigration leaders who he didn’t think worked fast enough. He is expected to appoint a secretary on a temporary basis as he enters the final year of his term in part because it would be tough to get the type of leader he wants confirmed by even the Republican-controlled Senate.

Cuccinelli declined to discuss his conversations with the president or his interest in the job, but did say it doesn’t matter if someone serves in acting capacity for any of the positions.

“I don’t think it hurts at all really,” Cuccinelli told reporters at an event Wednesday organized by the Christian Science Monitor. “What matters in the working arena is the work. … Whether I’m in an acting capacity or not doesn’t really affect that.”

Trump announced last week that Kevin McAleenan will step down as acting secretary after serving just six months. He oversaw a recent reduction in the number of migrants caught at the southwest border but Trump allies complained he wasn’t sufficiently committed to the president’s immigration agenda.

The change in leadership comes as Trump has signaled that immigration will once again be a central focus of his campaign after a series of steps in recent months to limit access to asylum and intensify enforcement within the U.S.

Mark Morgan, acting commissioner of Customs and Border Protection, and Thomas Homan, former acting director of Immigration and Customs Enforcement who turned down a job to serve as so-called border czar, are also being considered, according to the people familiar with the situation.

Next in line to become acting secretary is David Pekoske, administrator of the Transportation Security Administration, who has also been serving as acting deputy secretary at DHS, but he is not expected to be given the job. One person described it as an internal competition between Cuccinelli and Morgan.

Cuccinelli, who talks to Trump directly to discuss the administration’s plans to stem the tide of migrants across the U.S. border, has been told he’ll be involved with top immigration decisions, even those that are outside the scope of his agency. He has not spoken to Trump about the job but has indicated he wants it, according to the top DHS official.

“He is proven to be the best candidate out there,” said the top DHS official, who praised him for acting quickly and educating the public.

“Ken Cuccinelli checks two boxes for President Trump — style and substance,” said RJ Hauman, government relations director at the Federation for American Immigration Reform, which has been supportive of Cuccinelli in conversations with the White House. “He’ll successfully manage the sprawling bureaucracy at DHS, push back against activist judges and, most importantly, continue implementing President Trump’s immigration agenda.”

Morgan rejoined the Trump administration in May as acting ICE director, but moved to CBP the next month. The appointment represented a rapid ascent for the former Obama official, who left his post as Border Patrol chief during the early days of Trump’s presidency.

Since taking over at CBP, he’s hosted White House briefings on border security and repeatedly praised the president’s enforcement strategies. At the same time, he’s brushed aside humanitarian concerns over Trump policies, such as “remain in Mexico,” which forces certain non-Mexican asylum seekers to wait in that country pending the outcome of their U.S. cases.

A Customs and Border Protection spokesman declined to make Morgan available to discuss the possibility that he might be tapped for the secretary job. DHS declined to comment when asked who would become acting secretary after McAleenan’s departure. Instead, the department referred the request to the White House.

Homan unapologetically carried out Trump’s immigration crackdown through the first year and a half of the administration until his retirement in mid-2018. Trump announced in June that Homan would return as a “border czar,” but Homan was caught unaware and the move never happened.

While Homan said the White House has not contacted him about the DHS secretary role, he said he would consider it. “I’m not saying no, I’m not saying yes, but I’d sit down and have a discussion,” he said.

The appointment of Cuccinelli, Morgan or Homan as acting secretary or a similar workaround, however, could trigger legal challenges.

A statute that governs DHS succession places the deputy secretary and under secretary for management in line for the acting secretary role, although both of those positions are currently filled by acting officials.

Rebecca Jones, policy counsel at the Project on Government Oversight, a Washington-based watchdog, contends that the lack of Senate-confirmed officials within the Trump administration — and at DHS specifically — violates the Constitution’s mandate that the Senate vet and approve presidential nominees.

“It might be more convenient for the president to have people who are immediately going to do exactly what he wants them to do in the moment, but I don’t think it’s beneficial to our democracy, or transparency or accountability,” she said.

By signing up you agree to receive email newsletters or alerts from POLITICO. You can unsubscribe at any time.

Jones argues that the cast of acting officials at DHS makes it hard for the department to act effectively. “We need someone who’s knowledgeable and empowered to make the big decisions when the time comes,” she said.

A separate federal law that outlines procedures for filling vacancies requires that acting officials be either the “first assistant” to the position, a Senate-confirmed official detailed to the role, or a senior employee at the agency for 90 days during a 365-day period before the vacancy occurred.

Cuccinelli and Morgan joined after the departure of former Secretary Kirstjen Nielsen, the last Senate-confirmed DHS chief. Homan left the administration in late June 2018, which means he spent less than 90 days at the department before her exit.

Still, the White House used creative workarounds to install Cuccinelli and Morgan in their current roles. In both cases, the administration created new “principal deputy director” positions that allowed each official to run their respective agencies.

Cuccinelli’s appointment to USCIS already has been challenged in several lawsuits that argue the move violated federal law and a constitutional requirement for the Senate to vet top-level officials.

Tony Reardon, president of the National Treasury Employees Union, which represents 27,000 CBP employees worldwide, argued that top-level vacancies can hurt the performance of workers throughout an organization.

“Every agency needs stable leadership that puts forth consistent policies and guidance and sees that the workforce has the training and tools needed to implement those policies,” Reardon said in a written statement. “Turnovers and vacancies at the highest levels makes this much more difficult.”

By ANITA KUMAR and TED HESSON