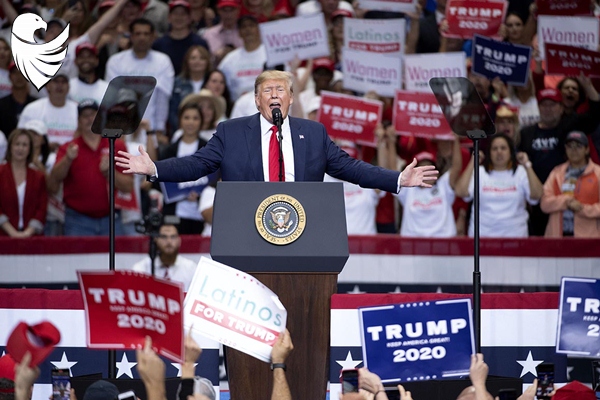 DALLAS — Texas on Thursday night offered President Donald Trump a much-needed break from the backlash over his Syria decision and the relentlessness of the Democrats’ impeachment inquiry.

To an adoring crowd at his campaign rally, he tested out new, aggressive messaging as he sought to cast Democrats as politically extreme, the Biden family as corrupt, and the media in cahoots with both of them as part of a grand conspiracy.

He justified the idea of removing American troops from Syria by saying he did not want to deplete the U.S. military anymore or continue to entangle the U.S. in what he called “the endless wars.”

It was good to let Turkey attack the Kurds, longtime U.S. allies in the fight against ISIS, Trump said, because “sometimes you have to let them fight like two kids. Then you pull them apart.”

The president spent the early part of his speech trying to undercut individuals or institutions that questioned him.

“The radical left tolerates no dissent,” he told his supporters. “These people are crazy. They have absolutely no respect for the will of the American people. First it was the Russia hoax. Then it was the smearing of a fine man, Justice Kavanaugh. Now they continue the outrageous impeachment witch hunt. They come after me, but what they are really doing is coming after the Republican Party.”

Throughout the rally, Trump stressed the importance of winning the 2020 election and portrayed the Democrats as too far left-leaning to legislate or govern. The latest impeachment inquiry was simply more evidence that Democrats don’t “love our country,” he said. “That crazy Nancy, she is crazy,” he added about Rep. Nancy Pelosi (D-Calif.), the speaker of the House.

The focus on former Vice President Joe Biden and the money that his son Hunter Biden made from overseas business deals also received the ire of the president and the crowd.

“The Bidens got rich while Americans got robbed,” he said on the same day the White House announced that it would hold the next G7 summit at the president’s resort in Doral, Fla.

Yet even an enthusiastic rally could not slow down the bad news in Washington.

On Thursday alone, Trump announced that Energy Secretary Rick Perry would depart by the end of the year, while the acting White House chief of staff, Mick Mulvaney, told reporters the administration had held up aid to Ukraine as leverage to nudge the country to investigate corruption.

Democrats quickly pounced on Mulvaney’s comments as proof of the White House’s quid pro quo approach to Ukraine. Only after several hours did Mulvaney walk back his statement.

Trump’s decision to travel to this decidedly red state came as his campaign seeks to build support for congressional Republicans struggling with brutal 2020 reelection battles shaped by the president’s wobbly political standing.

The Trump campaign feels confident the president will again win the state in 2020, according to two advisers close to the White House, even as Democrats make inroads in the vast urban areas and among state-held offices. But he could see the slimmest margin of victory for a GOP presidential candidate in generations: In 2016, he won by 9 percentage points, while past Republican presidential candidates won by larger margins in previous elections, including Mitt Romney by more than 15 points in 2012.

For Republicans, the concern lies mostly with down-ballot races as well as party support among suburban and female voters, two groups that turned away from the party during the 2018 midterms.

“I expect President Trump to win Texas by 5 percentage points, not 9 points this time,” said Cal Jillson, a political scientist at Southern Methodist University. “There are long-term demographic changes taking place in the state that eat into Republican support. The major cities like Austin, Houston and Dallas are already leaning blue. Plus, his Republican coalition has been destabilized by his own actions and conduct.”

The Trump campaign views Texas as a friendly territory — among the handful of states alongside Florida, New York and California where the president can easily raise millions of dollars with a single fundraising event and speak to arenas packed with fans.

“No one comes out for him like they do in Texas,” said one Republican close to the White House. “The Dallas and Fort Worth area is always a slam dunk for him. If he wanted to, he could stay down there for a whole week and raise $3 million a day.”

Trump headlined a luncheon event in Fort Worth on Thursday where the top tickets went for $250,000 per couple, according to an invitation obtained by POLITICO.

Taking a photo with the president cost $25,000 per couple, with a single lunch ticket going for $2,800. Event chairs included major Texas names such as the Moncriefs, Marions, Boenkers, Dormans, Kleinheinzes and Dale Rogers.

The rally offered the president a respite.

“Trump, throughout the election and the first three years of his presidency, has run a base strategy,” Jillson said. “Many presidents wouldn’t bother to come to Texas, but he spends a lot of time in Florida, Alabama, Texas and other Southern states revving up the base to make sure that his support does not dissipate. If he doesn’t hold his base, he is cooked.”

Texas Democrats have seen an uptick since the midterms in turnout among Hispanic voters and migration from the East and West Coasts, only increasing the number of left-leaning voters in the state, said Gilberto Hinojosa, chairman of the Texas Democratic Party.

“If Donald Trump thinks he is coming to Dallas because it is the home of the Dallas TV show, he’s got something else coming to him,” Hinojosa said. “There has not been a Republican county-wide elected official in Dallas for some time now. It is very, very blue now.”