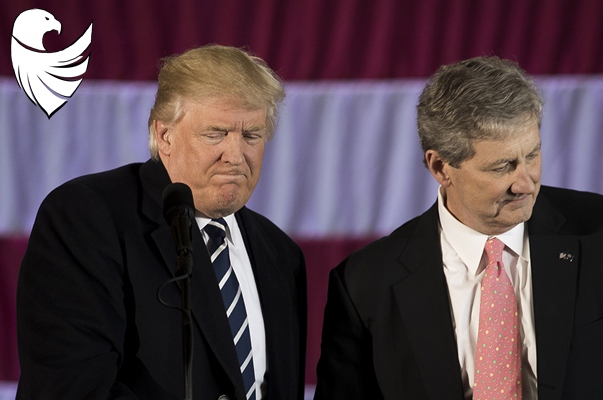 President Donald Trump is intensely monitoring his standing among Senate Republicans as Democrats’ impeachment inquiry ramps up, according to senators who have been in contact with the president and White House officials.

And with the microscope on their every move, some in the Republican Conference are taking a more proactive approach to demonstrate their loyalty. For example, take Sen. Mike Braun (R-Ind.), who called up Trump last Friday to let him know that he and his voters have Trump’s back.

“I just felt he needed to hear that Indiana is a state that’s grown more conservative and would epitomize a cross-section of conservatives in the country. And they are behind him wholeheartedly,” Braun said.

Trump is monitoring comments from his GOP colleagues, Braun said, but added that Trump didn’t seem worried about a GOP mutiny over the rapidly unfolding Ukraine scandal: “I sense a feeling of confidence.”

Still, as the prospect of an impeachment trial becomes ever-more likely, Trump is turning on anyone who criticizes him — and lavishing his defenders with praise. It’s a strategy Trump has long deployed but is becoming more crucial as he relies on Senate Republicans to keep him in office.

Yet if Trump is cool and confident, he’s also lashing out at his enemies in an increasingly ugly fashion, castigating Speaker Nancy Pelosi on Wednesday in a White House meeting, calling Sen. Mitt Romney (R-Utah) a “pompous ‘ass’” and even taking aim at steadfast ally Sen. Lindsey Graham (R-S.C.).

Those that stick by Trump, meanwhile, will get special attention.

After Sen. Ron Johnson defended Trump in The Wall Street Journal and on “Meet the Press” — even echoing Trump-backed conspiracy theories that left some Republicans scratching their heads — the Wisconsin Republican received a call from the president that very day.

The senator wouldn’t divulge the contents of the call, but it’s safe to say Trump was pleased. He later tweeted an endorsement of Johnson and condemnation of NBC’s Chuck Todd.

“He monitors most things very carefully, as you know. And I think that this is no exception. He watches a lot of TV, and we have a lot of members who are on, making statements in the media. And I think he pays attention to what they say,” Senate Majority Whip John Thune (R-S.D.) said. “His operating style is to be engaged with what other people are saying.”

And as Republicans twist amid the fast-moving Ukraine scandal and the president’s unpopular decision to withdraw from Syria, what’s become clear is no one wants to be on Team Romney.

Romney uncorked Trump’s fury for expressing concern over Trump’s calls for China and Ukraine to investigate Joe Biden: The president called him a “fool.” The moment was instructive: No other Republican joined Romney in condemning Trump’s behavior so fiercely.

“I don’t have other senators coming up and saying, ‘How can I join you in receiving the wrath of the White House?’” Romney said in an interview.

Even Trump’s loudest defenders on impeachment can’t escape the president.

Graham’s on-again, off-again criticisms of the president’s Syria policy became too much for Trump, with the president publicly dismissing the senator on Wednesday and telling him to concentrate on his job running the Judiciary Committee.

And with Trump still popular among the party base, Republicans are trying to engineer a partisan impeachment vote for the president.

Graham visited House Republicans on Wednesday to talk about his experience as a manager during the Clinton impeachment trial and emphasized what he sees as flaws in House Democrats’ process so far.

“You’re in for the ride of your lives. Get ready for it,” Graham told members, according to Rep. Andy Biggs (R-Ariz.). “Keep fighting, keep doing what you’re doing, and you’re in for a rough fight.”

The thinking in the GOP is if House Republicans stick together, Senate Republicans will as well. And then Trump will get party unity.