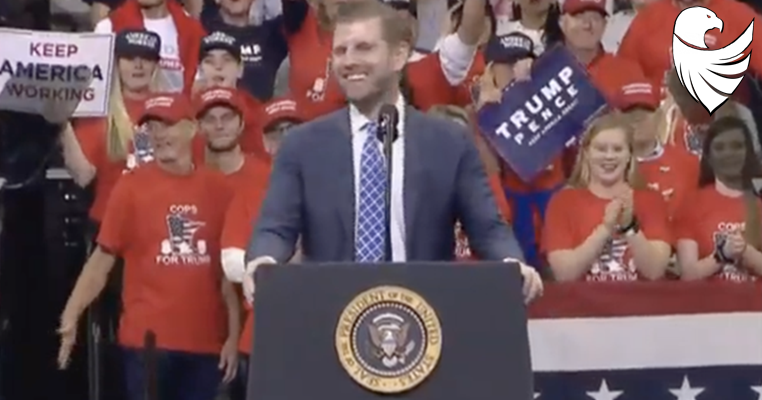 In a memorable moment, Eric Trump in Minnesota started a “lock him up” cheer directed at Hunter Biden.

Eric Trump then cut it off saying “we don’t need to lock him up” we just need to beat them.

Eric Trump in MN incites a “lock him up” cheer re Hunter Biden, crowd complies.

Then he cuts it off saying, “we don’t need to lock him up” we just need to beat them.

Yahoo reports prior to President Donald Trump taking the stage at Thursday night’s campaign rally in Minnesota—his first since the impeachment inquiry was announced—his son Eric Trump warmed the crowd up by leading them in a “Lock him up!” chant directed at Joe Biden’s son, Hunter.

The House Democrats announced last month that they would be pursuing an impeachment inquiry into the president’s attempts to pressure the Ukrainian president to investigate Joe Biden, who is a 2020 Democratic presidential candidate. Trump and his personal attorney Rudy Giuliani have pushed unsubstantiated claims that the former vice president forced Ukraine to fire a prosecutor in order to make an investigation into his son go away.

“How do you think his son is feeling after embezzling a lot of money?” Eric Trump asked the audience Thursday. “A lot of crookedness, he is not feeling too good. Maybe ‘Lock her up!’ goes to ‘Lock him up!’”

Trump, naturally, was referencing the long-running “Lock her up!” Trump rally chants that have been directed at former Democratic presidential nominee Hillary Clinton since 2016.

After some in the crowd began taking up the chant, Eric Trump added: “I like ‘Lock her up!’ a little bit more. but I don’t know, I like that. That is a good idea.”