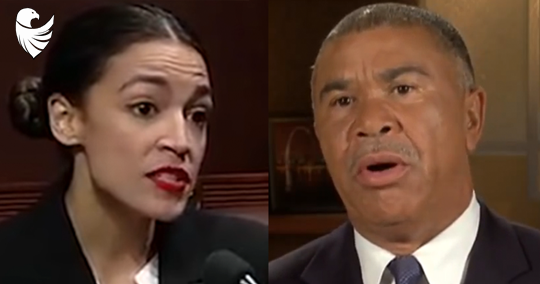 Missouri Democrats lawmaker Lacy Clay blasted AOC and her “squad” consisting of herself, Ilhan Omar, Rashida Tlaib, and Ayanna Pressley for resorting to playing the race card against Nancy Pelosi.

Rep. Lacy Clay just unloaded on @AOC , her chief of staff and Justice Democrats in the Speaker’s Lobby, calls them “juvenile,” says “their ignorance is beyond belief”: “You’re getting push back so you resort to using the race card? Unbelievable.”

2,428 people are talking about this

“Because you can’t get your way and because you’re getting push back you resort to using the race card. Unbelievable,’ said DEMOCRAT Lacy Clay to AOC. Hahahahahahahahahaha. pic.twitter.com/uPD4lyIKnf

Rep. William Lacy Clay, D-Mo., added to the mounting Democratic criticism of Rep. Alexandria Ocasio-Cortez, D-N.Y., slamming her “inappropriate” suggestion that House Speaker Nancy Pelosi, D-Calif., is singling out the New Yorker and her “squad” of fellow freshman because of their race.

“It tells you the level of ignorance to American history on their part as to what we are as the Democratic Caucus.

“It is so inappropriate. So uncalled for. It does not do anything to help with unity. It was unfair to Speaker Pelosi.”

Clay continued his broadside, saying the comment exposed how much Ocasio-Cortez and Reps. Ilhan Omar, D-Minn., Rashida Tlaib, D-Mich., and Ayanna Pressley, D-Mass., have to learn when it comes to being “effective legislators”.

“It’s going to take a process of maturing for those freshman members. They will have to learn to be effective legislators,” he said.

“It shows their lack of sensitivity to racism. To fall back on that (trope) is a weak argument. It has no place in a civil discussion.”