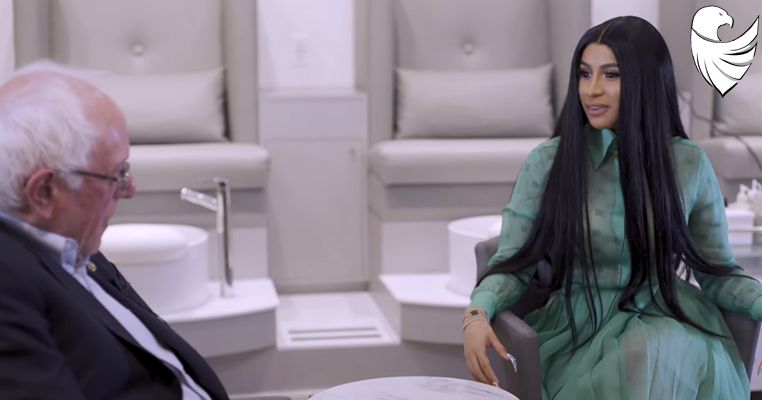 Bernie Sanders has enlisted the help of rapper Cardi B. who supports him and has expressed disdain for Trump.

The two sat down at The TEN Nail Bar in Detroit for a video Bernie posted on his official Youtube channel.

Per Yahoo, the rapper and political junkie sat down with presidential candidate Sen. Bernie Sanders for a new campaign video set in a Detroit nail salon.

The “Bodak Yellow” performer and Vermont senator share more than just an affinity for President Franklin Roosevelt (“He’s my favorite,” she raved, prompting Sanders to respond, “Well, I hope I’m your favorite after I’m elected.”). They also see eye-to-eye on issues such as increasing minimum wage, canceling student debt and defeating Donald Trump in 2020.

“We have this bully as a president and the only way to take him out is somebody winning,” Cardi noted.

“We’ve got to get rid of Donald Trump, obviously,” Sanders agreed, “because Donald Trump is an overt racist. He’s way out there.”

Cardi called the racist attitudes in the current political climate she sees “discouraging” to people of color, adding, “It makes us feel like we’re worthless.”

On the subject of police brutality, Sanders proposed having the Department of Justice investigate any officer-related killings and encouraged more diverse hiring, saying departments should “look like the communities they serve, not like an oppressive army.”