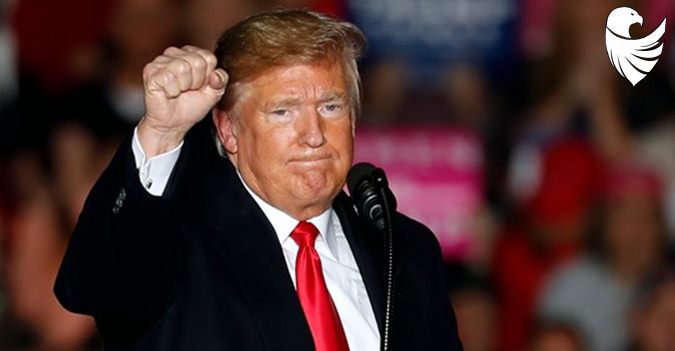 President Trump said in an interview that he plans to sign an executive order ending “birthright citizenship” for the children of non-American citizens who are born on U.S. soil, a move that would likely be challenged immediately in the courts over its constitutionality.

“It was always told to me that you needed a constitutional amendment. Guess what? You don’t,” Trump told “Axios on HBO” in an interview set to air Sunday, just two days before the midterm election. “You can definitely do it with an act of Congress. But now they’re saying I can do it just with an executive order.”

“We’re the only country in the world where a person comes in and has a baby, and the baby is essentially a citizen of the United States, with all of those benefits,” Trump said. (Per WorldAtlas, about 30 nations grant birthright citizenship.)

The president said, “It’s ridiculous. It’s ridiculous. And it has to end.” He said he has spoken with his legal advisers and that the move to issue the directive was “in the process.”

“It will happen, with an executive order,” Trump said.

Many legal analysts doubt the president’s theoretical executive order would fly with the Supreme Court.

“Here we have a situation where the text of the Constitution is quite clear and the Supreme Court has interpreted it that way,” Garrett Epps, a constitutional law professor at the University of Baltimore told USA TODAY. “So, for the president to assert that he can somehow overturn the text of the amendment and Supreme Court precedent by executive order is what we would call an extravagant claim.”

Epps speculated that Trump might be floating the idea of the executive order as a political move ahead of the election and that he might never actually issue it, given its weak legal standing.

“This is a transparent and blatantly unconstitutional attempt to sow division and fan the flames of anti-immigrant hatred in the days ahead of the midterms,” Jadwat said.

“The 14th Amendment is explicit on this question: Persons born in the U.S. are citizens of the U.S. and of the states in which they reside,” said Sarah E. Turberville, director of The Constitution Project with the Project on Government Oversight.

“You can quibble over whether this is a good policy, but you can’t quibble over what the Constitution very specifically says on the manner,” she said.

Even conservative justices who look “to the very text of the Constitution to decide such significant questions” would be reluctant to uphold the president, she said.

In a 2007 op-ed for the Los Angeles Times, James C. Ho – appointed to the 5th U.S. Circuit Court of Appeals by Trump in 2017 – wrote, “Birthright citizenship is a constitutional right, no less for the children of undocumented persons than for descendants of passengers of the Mayflower.”

Yale law professor Peter Schuck is one of a few legal analysts who believe, “contrary to traditional assumptions on this issue, Congress has the power under the Constitution” to end birthright citizenship  –  although he concedes that “is a question of interpretation.”

Yet even Schuck says Trump “clearly cannot” end birthright citizenship with an executive order. “I feel confident that no competent lawyer would advise him otherwise. This is just pre-election politics and misrepresentation and should be sharply criticized as such,” he said.

Vice President Mike Pence claimed Tuesday that it’s not clear whether the constitutional amendment that created “birthright citizenship” applies to people who are in the country illegally.

But in a 1982 decision, the Supreme Court ruled that even if a person enters the country illegally, that person is within U.S. jurisdiction and “is subject to the full range of obligations imposed by the State’s civil and criminal laws. And until he leaves the jurisdiction – either voluntarily, or involuntarily in accordance with the Constitution and laws of the United States – he is entitled to the equal protection of the laws that a State may choose to establish.”

In 2011, Ho wrote that the “plain meaning of this language is clear. A foreign national living in the United States is ‘subject to the jurisdiction thereof’ because he is legally required to obey U.S. law.”

The 14th Amendment was adopted in 1868, after the Civil War. It was largely intended to grant citizenship to newly freed slaves and undo the 1857 Dred Scott decision in which the Supreme Court ruled that slaves were not citizens, but property.

The concept of birthright citizenship was upheld by the U.S. Supreme Court in 1898 in United States v. Wong Kim Ark when the court affirmed the citizenship of a man born on U.S. soil to parents who were Chinese nationals.

In July, Michael Anton, who served as a spokesman for Trump’s National Security Council, argued in a Washington Post op-ed that “subject to the jurisdiction” of the U.S. would not apply to people who entered the country illegally. He also said that in United States v. Wong Kim Ark, the court only ruled that children of legal residents are citizens.

“An executive order could specify to federal agencies that the children of noncitizens are not citizens,” Anton concluded, while conceding that “such an order would, of course, immediately be challenged in the courts.”

Curtailing immigration has been a defining element of Trump’s political platform since he announced his candidacy for president in 2015, when he derided Mexico: “They’re bringing drugs. They’re bringing crime. They’re rapists. And some, I assume, are good people.”

That same year, Trump pledged to stop end birthright citizenship, implying women from other nations come to the United States to give birth in a calculated move to gain U.S. citizenship.

“Many of the great scholars say that anchor babies are not covered” by the 14th Amendment, he told supporters at a rally in September 2015, using a derisive term for children born to noncitizen parents.

Rep. Steve King, R-Iowa, introduced the Birthright Citizenship Act of 2017 in January 2017, which proposes to limit the 14th Amendment application to citizens, permanent residents and noncitizens serving in the U.S. military. The bill has been in committee since its introduction.

Now it appears Trump has concluded that even an act of Congress is unnecessary and can be sidestepped with an executive order.

“It’s fascinating to me to watch how this discussion has deteriorated over the past decade,” said Epps, who is also a Supreme Court correspondent for The Atlantic. “Because 10 years ago, the nativist right was saying we needed to amend the Constitution to do away with birthright citizenship.”

He continued: “Then they moved on over the next few years to say it could be done by statute, and only in the past seven or eight months has the claim been put forward that the president can do it by executive order.”

Sen. Lindsey Graham, R-S.C., praised Trump for trying to do away with the “absurd policy” of birthright citizenship. Graham opposed the law during his unsuccessful presidential campaign in 2016 and said he would introduce a bill to overturn the law in Congress.

“The United States is one of two developed countries in the world who grant citizenship based on location of birth,” Graham wrote on Twitter. “This policy is a magnet for illegal immigration, out of the mainstream of the developed world, and needs to come to an end.”

Sen. Tim Kaine, D-Va., said Trump was trying to “rewrite the Constitution on his own.”

“An executive order to eliminate birthright citizenship would be a violation of his oath of office. And it reveals who he is – a man who longs to return to the days when African Americans and members of other ethnic minorities are denied the equality promised by Jefferson and Lincoln that is enshrined in our Constitution as America’s moral North Star,” Kaine said in a statement.

One of Trump’s first acts as president was to halt immigration from a number of predominantly Muslim nations, a move that was first blocked by the courts but, after some modification, was eventually upheld by the Supreme Court.

This year, the Trump administration sparked outraged opposition when it began separating migrant children from their parents at the U.S. border. That policy was also blocked by the courts.

In recent days Trump has railed against a “caravan” of Central American migrants traveling to the U.S.-Mexico border in search of asylum from the poverty and violence in their home countries. The president has claimed the group constitutes “an invasion” and said, without evidence, that it includes “gang members” and “very bad people.”