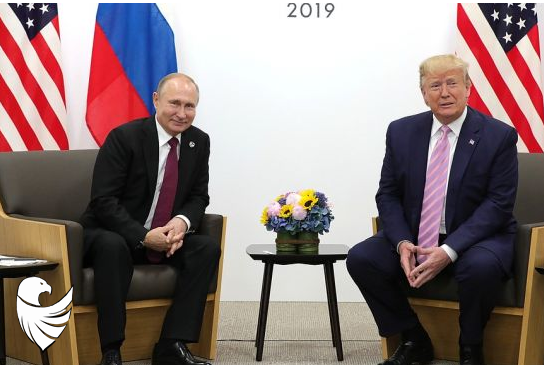 Vladimir Putin talked about the talks with Donald Trump
The US leader has made the topic of Russian-arrested Ukrainian sailors one of the priorities in the talk, the Russian head of state said.

Russian President Vladimir Putin told the contents of a conversation with his US counterpart, Donald Trump, on the sidelines of the G20 summit in the Japanese city of Osaka. He said the US leader has made the topic of Russian sailors detained by Russia one of the top priorities in the talk, handed over by TASS and the Bullet Agency.

“This topic was raised. I no longer remember, at lunch or in our meeting, but in any case, the US president made this topic one of the priorities during our G20 talks, “he told reporters after the summit in Japan .

Putin stressed that on this issue “there is no decision yet, a lawsuit runs, we have to wait for the results, and then we will decide”.

“But the main thing is that it does not happen during the election campaign in Ukraine, so as not to link these processes with the domestic Ukrainian agenda,” the president added.

In addition, the Russian president announced that the talk with Trump affected the subject of the charges against Moscow in the interference of the US elections.

“Yes, we talked about it. We spoke about Venezuela and the elections, “he told reporters in response to a corresponding question.

Putin also said the interference in Russia’s work was daily.

“We see what is happening. But we do not make noise, we do not flinch, although the interference (in the work of Russia outside) is happening daily, “the Russian leader said.

“Unfortunately, this is the practice of international relations,” he added.

In Putin’s words, there are deep reasons for such an intervention, but “they do not want to admit”. “It seems to me that I have not said anything new because I have talked about it many times,” the president said.

The prospects for START-3

Another topic of the negotiations was the question of the prospects for the continuation of the START-3 contract. In the words of the Russian head of state, the foreign ministers of Russia and the United States were instructed to start consultations on the issue.

“As far as START-3 is concerned, we have instructed the Foreign Ministries to start consultations on this issue. Whether these consultations will lead to the extension of the START-3 contract, I still do not know, it is too early to say, but we also discussed this, “Putin said.

Overall, he appreciated the conversation with Trump as good, very business and pragmatic. “Practically we went through the whole list of questions of mutual interest. This also applies to our economic relations, they are in an unsatisfactory condition, “Putin added.

He recalled the interest of American business in the Russian market, noting that the US delegation of the International Economic Forum in St. Petersburg was one of the most representative.

“Here we have what to think about. We reaffirmed our readiness to create a corresponding structure of business community representatives (both sides) to address issues related to future prospects for trade and economic development, “Putin said.

Moreover, in the words of the Russian leader, he discussed with Trump the situation in different regions of the world. “In general, these were useful consultations,” he concluded.
Trump talks a little, but he does more and Putin talks about the loophole.

← We must have trade – between Russia and the US ← BREAKING: Trump Fires Back at Jimmy Carter “A Terrible President”