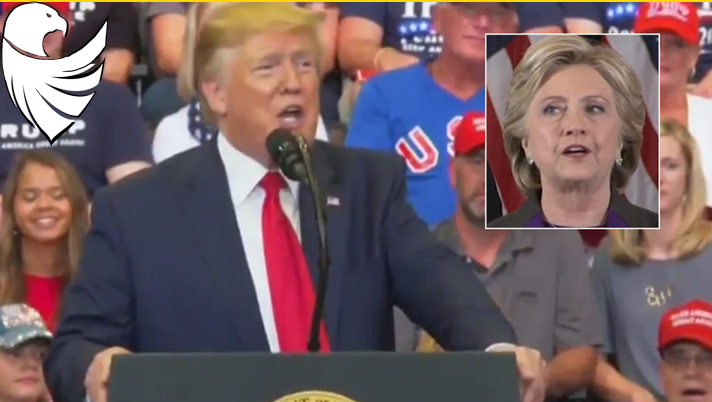 During a high energy rally in Ohio, the Trump crowd erupted in the iconic “Lock Her Up” chant when Hillary was mentioned.

Vox journalist Aaron Rupar tweeted the video along with a video of Trump taking aim at the Baltimore crime rate.

"Lock her up" chants after Trump brings up Hillary Clinton pic.twitter.com/zlyhmcUWEl

Per the LATimes, President Donald Trump used a revved-up rally Thursday in Cincinnati to tear into the Democrats he has been elevating as his new political foils, attacking four liberal congresswomen of color and their party’s urban leaders, while also training fire on those he could be facing in 2020.

But the president mostly avoided the racial controversy that has dominated recent weeks as he basked in front of the raucous crowd for nearly 90 minutes, unleashing broadside after broadside on his political foes. Trump, who had faced widespread criticism for not doing more to stop the chants of “Send her back” about Somali-born Rep. Ilhan Omar at a rally last month, seemed to want to avoid further furor, saying he would prefer his supporters avoid the chant. He largely stuck to a greatest hits performance.

While he did not mention Omar or her three colleagues by name in the opening moments of his Ohio gathering, the target of his attacks was unmistakable.

“The Democrat party is now being led by four left-wing extremists who reject everything that we hold dear,” Trump said of Omar and her fellow House Democrats Alexandria Ocasio-Cortez of New York, Rashida Tlaib of Michigan and Ayanna Pressley of Massachusetts.

But the fleeting mention did not lead to further chants. Nor did an extended attack on Democratic leaders of urban areas, whom Trump has laced into in recent days as part of his incendiary broadsides against Rep. Elijah Cummings and the majority-black city of Baltimore.

“No one has paid a higher price for the far-left destructive agenda than Americans living in our nation’s inner cities,” Trump said, drawing cheers from the mostly white crowd in the packed arena on the banks of the Ohio River. “We send billions and billions and billions for years and years, and it’s stolen money, and it’s wasted money.”

The rally was the first for Trump since the “Send her back” chant at a North Carolina rally was denounced by Democrats and unnerved Republicans fearful of a presidential campaign fought on racial lines.

In the early moments of Thursday’s rally, Trump declared, “I don’t want to be controversial.” He mostly stuck to it.