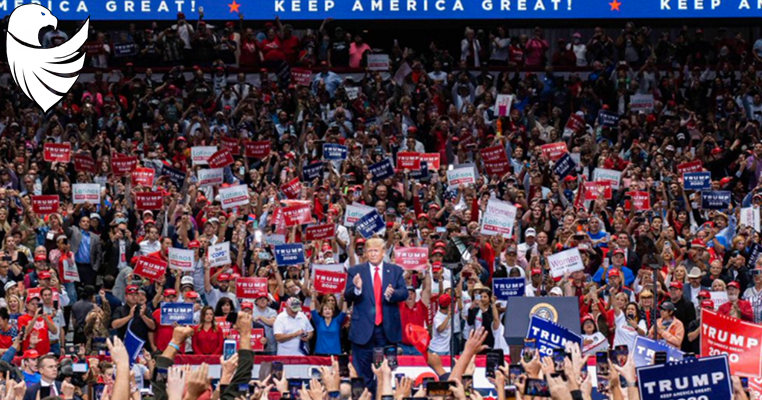 The radical left tolerates no dissent, it permits no opposition, it accepts no compromise, and it has absolutely no respect for the will of the American People. They are coming after me, because I am fighting for YOU!

He included an incredible photo of an enthusiastic Dallas rally crowd.

The radical left tolerates no dissent, it permits no opposition, it accepts no compromise, and it has absolutely no respect for the will of the American People. They are coming after me, because I am fighting for YOU! #TrumpRallyDallas #KAG2020 pic.twitter.com/OthKwS1bud

In case you missed it, President Trump also tweeted a video of the entire event.

Thank you Dallas, Texas – I love you! #TrumpRallyDallas #KAG2020 https://t.co/meWpesDYeM

Thousands attended the Dallas rally, with some lining up more than 24 hours in advance.

Here’s what the media won’t show you:

Fox News reports President Trump headlined a campaign rally on friendly turf in Dallas on Thursday, just hours after Energy Secretary and former Texas Gov. Rick Perry announced he would soon step aside amid scrutiny from House Democrats conducting an impeachment inquiry — and a week after chaos and violence broke out at a Trump rally in Democratic-leaning Minnesota.

A massive crowd of approximately 30,000 gathered outside the American Airlines Center to watch the speech on a large screen, as the president launched into an extended critique of 2020 Democratic presidential candidates. He derided former Texas Rep. Beto O’Rourke as “very dumb” for pushing to confiscate guns and tax religious institutions, and remarked that Joe Biden’s family overtly profited from his political career.

“Last week, a very dumb Democrat candidate for president — that’s the end of him in this state — pledged to revoke the tax-exempt status of many churches and religious charities,” Trump said, as boos rocked the arena. “And by the way, that was after, a few weeks ago, he said, ‘Excuse me, we’re gonna take your guns away.’” … The flailer. You remember he was flailing all over the place?”