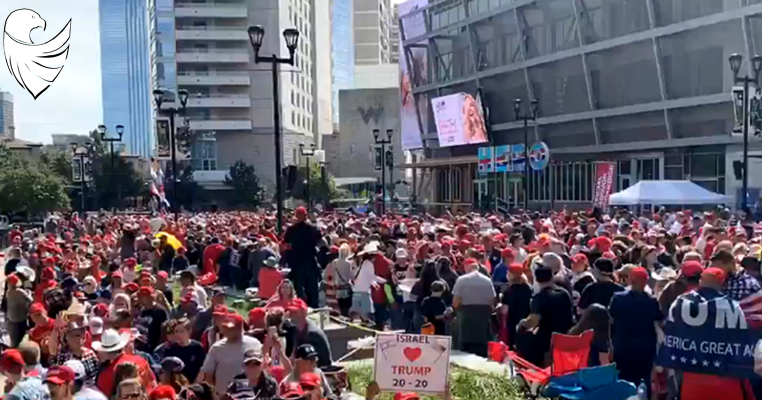 Thousands are lined up outside the @AmericanAir Center in Dallas, TX for today’s #KAG rally with @realDonaldTrump

Going to be a MASSIVE crowd! pic.twitter.com/cj3rDDGLXa

The line is so long that we couldn’t fit it into one video! Second half of this record breaking crowd for tonight’s #KAG rally with @realDonaldTrump! pic.twitter.com/nEPCrsnr7C

Terri Hammack writes “20k , but they’re estimating there’s at least twice that waiting in line! The lines go as far as the eye can see!#TexansLoveTrump”

20k , but they’re estimating there’s at least twice that waiting in line! The lines go as far as the eye can see!#TexansLoveTrump

RUSH: I have a photo I want to show you, those of you watching the Dittocam. Trump has a rally in Dallas, and this is a picture not long ago. The rally is tonight. This picture was just moments ago. This is the crowd getting ready to go into the arena in Dallas. They are lined up already.

There’s even a little more. I cropped the picture on the right side. There’s a few stragglers even on the right that you can’t see. I cropped it so that it would be a little bit larger on the Dittocam frame. But they’re lining up in Dallas already. They’ve been lining up since yesterday, actually.