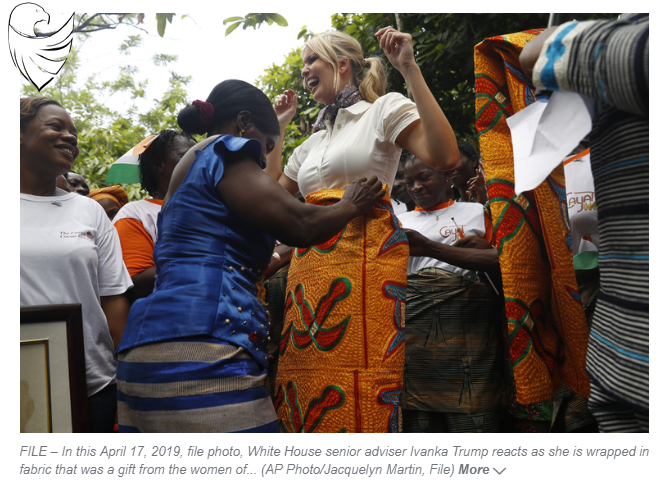 WASHINGTON — Ivanka Trump is applauding the recent passage of legislation in Ivory Coast related to changes she pushed during her April trip to Africa.

The country is in the process of updating its family code to make it more equitable to women — a move President Donald Trump’s eldest daughter and senior adviser praised as “a great step forward.”

“We are pleased to recognize and applaud the Ivorian government’s recent passage of the marriage law, which supports women’s equal management of household assets,” she said in a statement to The Associated Press.

While the legislation proposing the changes had already been in the pipeline at the time of Ivanka Trump’s visit, her team is pointing to it as a sign of the potential impact of the global women’s initiative she championed. It aims to empower 50 million women in developing countries around the world by 2025 by providing job training and financial support and supporting legal and regulatory changes. The White House’s Women’s Global Development and Prosperity Initiative was launched in February and received an initial investment of $50 million from the U.S. Agency for International Development.

In her conversations with Ivory Coast Vice President Daniel Duncan during her visit, Ivanka Trump said, she and her team encouraged the passage of legislation to advance women’s rights and legal status, including doing away with laws that restricted women from owning or inheriting property.

Under the revised code, husbands and wives will have more equal say in managing household assets and making financial decisions. That’s in addition to other changes, such as new measures to ensure that widows are entitled to inheritances, additional protections against domestic violence, and setting the minimum age for marriage at 18 for both women and men.

Ivory Coast President Alassane Ouattara’s governing coalition dissolved in 2012 after some members resigned in protest of a proposed marriage law that would have made wives the joint heads of households. This time, however, the measures have drawn little protest.

W-GDP and the Millennium Challenge Corporation, an independent U.S. foreign assistance agency, said in a joint statement that the laws’ passage “signals a new direction in Côte d’Ivoire that recognizes the critical role women play in advancing economic prosperity in their family, community, and for their country.”

Ivanka Trump has made women’s economic empowerment a centerpiece of her White House portfolio and has made a number of international trips to highlight the issue.

The president’s 2020 budget proposal requests an additional $100 million for the initiative, even as he has proposed cuts to other foreign aid.

← BREAKING: AOC Calls for an END to the DHS! ← Lewandowski “Democrats are Too Far Left to Win Middle America”