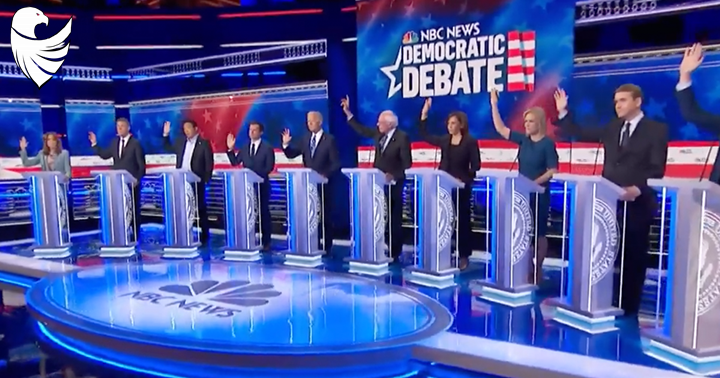 in his “Salute to America” last week extolled the values of American valor and reminded us all that “for Americans, nothing is impossible.” It is this sense of American pride and adoration for the land of opportunity that rallied voters across the nation in 2016 to defend the ideas of individual liberty and national sovereignty that make our country great.

Nowhere was this more true than in America’s heartland, where generations of Americans have served in the military with pride and succeeded at the highest levels in the nation they love, for the people they love.

However, if you’ve paid attention to the policy proposals from leading candidates vying to take on President Trump in 2020, you wouldn’t get the sense that this Middle America demographic is one they’re chasing. In fact, you’d probably think each one is consciously choosing to abandon the ideas that motivated voters from Mississippi to the Midwest, and to instead focus on winning the race to the left in order to capture the soul of the new Democratic Party.

I get it: Primaries are tough to win and, in a field thrown wide open after the last round of debates, the Democratic candidates have every motivation to excite their base as much as possible to win the “invisible primary” of polling and fundraising before the 2020 primaries begin. But how, exactly, do they plan on doing that? Let’s look at some of the highlights from our top candidates:

Crazy Bernie has a lot of ideas to fundamentally transform capitalist America into a socialist country, but his newest radical proposal to cancel all student debt has even some Democrats scratching their heads. Aiming to wipe $1.6 trillion of financial obligations off the balance sheets of 45 million current and former university students, Bernie’s big spending spree might not accomplish what he intends. For the lawyers, doctors and other high-earning professionals who took out loans to educate themselves, their debts are entirely forgiven (even though they’d have no problem paying them off). For the single mother who never had the chance to go to college and, instead, worked to take care of her young kids, her taxes go up. Go figure.

Following a monster debate performance, in which she absolutely crushedformer Vice President Joe Biden, Sen. Harris has made a place for herself in the Democratic field. If recent polls are any indication, she may be on the brink of becoming the new frontrunner. But whether she’s running for president or supreme leader is a little unclear, based on her recent tweetsregarding “gun safety.” On July 1, she promised that when “elected president, I will give Congress 100 days to put a gun safety bill on my desk for signature. And if they don’t, I will take executive action.” I’m pretty sure the Constitution would have a bit of a problem with any drastic moves she might be imagining. But she isn’t the only one advertising plans to scratch out sections of our nation’s governing document in fulfillment of an agenda.

I expected a little more from the South Bend, Ind., mayor, since he hails from a great state of the heartland. However, the middle of his campaign site, under the section entitled “Democracy,” states unequivocally that the “Electoral College has to go.” A rallying cry of fringe groups on the left since the turn of the century, this position — advocating for the prevailing cultures in big states like New York and California to wipe out any semblance of importance in the national dialogue for the lesser populated states of Middle America — has made its way into the mainstream for 2020. After all, if you can’t win at the game you’re playing, change the rules in your favor. And once that gets old, maybe you should have no rules at all.

No rules, apparently, seems like a great idea to Warren, at least when it comes to illegal immigration. Endorsing perhaps the most radical idea to come out of the primary field, she wants to decriminalize illegal border crossings. Under a Warren administration, it would no longer be a federal crime for persons unauthorized to enter the United States to cross over the southern border. There would be no disincentive to attempt illegal entry, making the entire notion of legal immigration seem like a waste of time and effort. The American electorate, particularly in the heartland, voted for border security in 2016. Warren’s answer? Open borders. We’ll see how this one plays out.

The “centrist candidate” is starting to notice that such a persona might not fly with today’s Democratic Party base. These are no longer Barack Obama’s voters. As much as this irks Ol’ Joe, he’s trying to adapt to become hip with the kids but still hold on to some of the old-timey Democratic greatest hits.

Day 1 priority of a President Biden? Repeal the Trump tax cuts that gave economic relief to 90 percent of American workers. What would he do with the tax revenue he took back from middle-class families? Why, fund a plagiarized climate plan embracing the big points of the Green New Deal. Something about all of this just reeks of familiarity. It leaves me wondering if he, too, will go to Ohio and promise to put coal miners out of business.